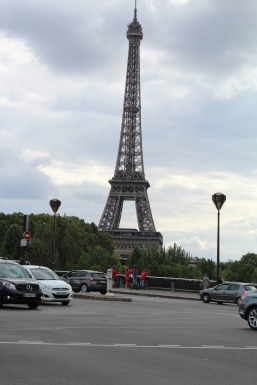 Almost a cliché, I’m sitting, coffee by my side, writing in a Paris apartment. I’m waiting while my wife sleeps off her third night of bread eating despite her gluten intolerance. 🙂

In my new role as F.S.L. Lead, I’ve read a lot in the first month about the acquisition of a second language. But while here in Paris, I have been reflecting on how I live with my first language and the implications that reflection has on how we learn, maintain and deepen language learning.

I was born 50 years ago to parents who had recently moved from the Acadian Coast to Mimico for work. As my parents interacted with me, I imagine my early thought processes, my early problem solving, my formative synaptic connections happened in French. With French as their first and only language, they would have spoken to me, comforted me and scolded me ‘en français, s’il-vous-plaît’. My English came from the neighbourhood and the T.V. I am part of the original ‘Sesame Street’ generation. I don’t ever remember not being able to speak or understand both languages, but I certainly imagine that my languages developed somewhat simultaneously.

Fast-forward four-plus decades. I have lived exclusively in English-speaking environments. My first few days in Paris highlight the non-linguistic elements of language. I can understand written and spoken French with near-native fluency. I can speak it without initially letting on that it isn’t my native tongue. But, after using a few sentences, I find myself frequently tongue-tied. I lack the cultural context. And I find myself pondering questions such as:

How should I order my coffee? What does that mean on the menu? What is the correct way to ask that question? What is the difference between café, cave à vin, brasserie, pub and restaurant? Is there a particular daily paper I should get if I want to read my news from a particular point of view? …and numerous others.

I have lived 50 years going through life as an English-using, white, Canadian male with a significant knowledge of French. My schooling, from the 2nd grade until the end of high school, took place in a newly emerging Ontario French school system. Yet I feel my anxiety level rise as I contemplate how to manage simple daily tasks in a language that is, in reality, my first.

It causes me to reflect on what we ask our students to do in French classes every day. We want to provide authentic experiences. We approach language acquisition from an experiential as opposed to a technical starting point. That brings a practical purpose to learning. I think that’s a good thing. But are we recognizing that the cultural context, the non-French ‘vécu’ our students bring with them into our classrooms and schools might be as much a challenge to second language acquisition as the lack of vocabulary, syntax and grammar? We are trying to bring them with us on a learning journey. Are we recognizing that their starting point is going to influence how successful they are?

View all posts by Peter LeBlanc